Elementals: Gaia is helping herself with souls that are from within her and become human!

Gaia helps herself with elementals, and elementals help humanity to connect with Gaia.

I am sure that some of you could imagine that there was going to be an entry about elementals. Last week we talked about incarnated angels (and the previous one of the starseeds.) As I mentioned in previous entries, there are four types of souls on this planet. In order not to leave anyone, I will talk about human souls for next week. But hey, this week, we return to Earth. In fact, at its best, since these souls are part of Gaia.

Although the elementals do not feel nostalgic (they are part of the house they live in!) They are not 100% free like humans. Usually, elementals should avoid living in highly developed and populated cities. If they do, they will need to go to the park (or even drive to a more profound nature) quite occasionally. Otherwise, they could also get sick or go into severe depression. The ideal for an elemental is to live in an area surrounded by nature.

It is very nice sometimes to listen to the songs of Earth, it can be nurturing!

The “lower world” (plane), elementals, and the consciousness of Earth, Gaia.

Elementals have existed since the Earth began to exist. They not only incarnate in humans but also animals and especially plants. In fact, through a shamanic journey to the lower world (also called the elemental/primeval world), we can meet elemental beings in their original form. Some of the beings we call imaginary are in the lower world. Not all, but it is possible to meet some such as fairies, unicorns, gnomes, strange beings that I can’t describe, and even sentient fragments of elements (air, water, earth, fire.)

You can connect with these beings through one of these journeys. Soon, I will talk about the lower, middle, and upper world. There may be many more elementals that we are unable to perceive. These cooperate with the balance of the planet herself. Yes, that balance that Humanity is rapidly destroying by not caring. And precisely, the main reason that there are elemental humans right now. These humans are like spiritual ambassadors of the Earth.

Even elementals who are not aware of their existence or origin will always channel a lot of energy through the root chakra.

Each planet has its elementals. Each planet is/has a soul in itself (the Earth has a soul too.) The elemental souls also come from the source of light. However, they became part of the soul of the Earth. They incarnate as humans and contribute their grain of sand (pun intended) to make this a better planet. It does not mean that all elementals come with a specific purpose. Many human elementals have difficulty understanding the order, tranquility, good or evil (as well as Nature does itself.)

It can make human elementals lazier, seeking for fun, even beyond responsibilities, and not getting tired of it. They do not usually have interests beyond Earth. An elemental will prefer to go to a forest than a planetarium! In a way, an elemental soul will almost always prefer a quiet and simple life in nature. Most are conformists, and if everything is okay, they are happy (even if there are some unmet needs). An elemental is not usually going to question duality, extraterrestrial consciousness, and in some cases, not even human. Firstly, elementals come to help the Earth and the people to connect with the Earth, to take it into account with our development as a civilization.

Two types: Those who feel they are the Earth and those who think that everything on Earth belongs to them.

A common aspect is that elementals are usually cheerful and free souls. It is a liberation that only they understand. However, the entire “deal” is less than impressive. As a result of meeting other elementals, I have been able to observe that there are two “subtypes.” The perception and awareness of our planet and other beings living with us change here.

Those who hear Gaia’s “scream” calling.

A vast majority of elementals feel and perceive in parallel with the Earth. For example, in those moments when there is a natural disaster or a human accident that damages the planet (for example, a ship full of oil breaks), these elementals suffer a lot. Many times when there are many fires, or nature suffers due to a large scale event; these elementals can even go into depression. The mood of the Earth affects all elementals, but this type more.

These elementals often look for groups such as Greenpeace and other local and international activist groups to defend the rights of animals and, above all, of the planet. They are the voice of the forest, of animals, of everything that concerns the planet Earth. I want to underline that the elementary consciousness focuses mainly on the well-being of Earth. Some elementals can fight tirelessly against global warming, movements harmful to the planet, etc.

The ones who feel entitled to everything on this planet since they “are” the earth too.

This type of elementals is a little less common; however, it is also a trait worth talking about. I consider that perhaps this is a slightly “more demanding” version of an elemental who is in balance. However, I met elementals with a particular spiritual awakening that still acted in this way. These may have empathic connections with the Earth or not, however, they will feel that they are part of the planet; therefore, they think they are the planet. Elementals think they own the other animals, insects, and plants, as is the case with many human souls. However, in this case, it is worse, because this type of elemental can act abusively and with authority over other beings that live on Earth.

Even so, it would be difficult for these elementals to damage the planet on purpose. They may also suffer the same problems as other elementals. However, as the Earth gives us life, and they are part of the Earth, they might feel that all inhabitants have to be grateful for it, always. Generally, this is at the subconscious level for the elementals that are like that. Nor do they act with this authority with humans; however, they will do so with smaller animals, and especially with insects.

Elementals can enjoy very much a soul journey to the lower world.

Elementals can also have a spiritual purpose. In fact, in many ways, it is like that, but not at the same time. For example, many ancestors and modern shamans are elementals. Also, through activism, as I mentioned earlier. Working with music, for example, is something that goes very well with this kind of soul. They can heal other humans (either by the vibration of music, by making music – and fun – or both), and in that way, they improve global energy.

Elementals can also have excellent skills in holistic but earthly works. For example, some elementals decide to be healers using only gems and crystals. Other jobs such as masseuse, gardeners, botanical decoration, or even biology and studying the planet may be ideal for them.

The time will come that the elemental souls will return to the “lower world” or be part of the Earth, that until they return to Source in several billion years.

We have one more type of soul, the most common and evident on Earth: human souls. Although it seems silly to talk about it because it looks “logic and the norm,” it is necessary. I spoke of the other three types, and humans have unique characteristics that the other three groups do not have that. But I will share more next week! I am pretty sure you are going to enjoy the read! See you next Wednesday!

← Prev: Incarnated Angels are angelic souls who came here to have a human experience. Next: Human souls: They have traveled and continue to travel a long path of development and expansion. →

END_OF_DOCUMENT_TOKEN_TO_BE_REPLACED 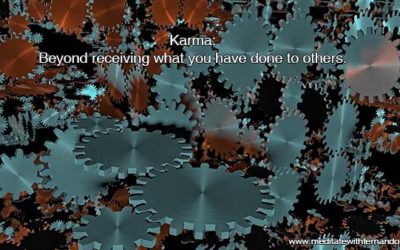 What is karma exactly? We are going to talk all about karma and its effects.

Karma: We are going to explore everything about karma and its effects.