Every action can cause a ripple that will multiply and reach unbelievably far.

Even a small action can ripple and become something life-changing.

Hello! Did you know that all actions and decisions will create a ripple that can benefit (or harm) third parties? For example, if you receive a shamanic healing session, you may find more of yourself. You will be a light to the people around you. One day you may meet someone and change your life by merely pushing the car. Why? Because of your help, for example, that person has been able to arrive on time. That person was going to an event where he finds a much better job. Things like that happen a lot, and I will explain a little.

Today’s topic is quite easy to understand, and there is not much to say. However, sometimes, reading something you already know can rekindle your consciousness and bring reminders. If you frequent the blog (thank you, thank you, thank you), you have already read me about the power of the law of attraction with gratitude and positive energy. I like to share about this because it helps everyone, including myself. This “ripple” happens with absolutely everything, whether positive or negative. This “ripple” is an “element” to consider.

One reason I do the forecasts.

A parrot in a cave makes a scandal thanks to the echo/ripple.

Although this is nonsense, it just occurred to me that it is a good situation rhetorically speaking. Imagine that inside a colossal cave, a parrot begins to say things and does not stop. Thanks to the echo/ripple of that cave, everything the parrot says multiplies. Even if the parrot talks a lot, it could also give the impression that there are several. Imagine that your mind is that cave, and your thoughts are that parrot that does not stop talking. Your thoughts go full throttle, and it seems that the less you want to think about a problem, the more strongly it shows (again) in your consciousness. As is an echo/ripple that is replicating and multiplying like the parrot in the cave.

If people are camping near the cave, they may even notice this echo and realize that there are one (or more) parrots in the cave. The noise will attract the attention of these people. It may bring a good or bad result as much for the parrot as for them. They could try to help the parrot out, they could hunt her to eat her (these people have not eaten for days), or one of these people may even have an accident in the cave and break a leg.

Of course, I have no plans to make an entry on parrots (although I do have one about horses and another about cats, hehe). But let’s go back to the mind and thoughts. Let’s say you have a saturated head thinking about a lot of things at once. Are these things positive, negative, or both? Depending on what this mental “parrot” says, your mood may be altered (for better or worse). Here you are affecting your heart chakra, which is far from your mind, of course.

If you have people around you, they will at least grasp your emotional status (like those outside the cave.) This person can help or harm you, depending on the situation, with or without intention. You can even accidentally damage the feelings of these people (such as the cave accident). As you can see, rhetorically speaking are similar situations. In fact, at the energy level, there is no difference since each moment will have its energy alteration, be it good or bad,

Here we can see how a simple thought can cause an “echo” with a very long range.

Where are the limits of this cave?

The example before is straightforward to happen; however, although there is no one around you, you will find a much more powerful “echo/ripple.” And here we would start talking about the law of attraction. That entry has an exercise to control that ripple.

There is also the “echo/ripple” that we cause ourselves when we actively want to share an idea. Many of the great inventions have happened by chance. However, others have been thanks to ideas, even perhaps crazy for that time. These inventors took action to replicate that “echo/ripple” that was within their heads. They presented their ideas to contribute something new that helps this civilization. Obviously, for this reason, it is excellent to cause this ripple. You will impact many people.

The ripple of your actions.

The ripple does not only going around what is in your mind but in your actions as well. More than five years ago, I wrote an entry. The previous version of this website, which I wrote all the code myself, had an early version of the blog. I know that maybe you remember if you were around. In fact, I know of some more people I already worked with who visited the first version of this page under a hosting provider called “Webs,” which was quite bad. I do not recommend them. At that time, I didn’t have backups or older files. And it is a shame because there was a very long entry of “Mr. Right,” a human being who is helping everyone and creating many positive causes and effects.

However, I will get to the point ad wrap up this week blog‘s article. Sometimes, something that may seem insignificant can bring a significant impact. A funny example typical of cartoons, where a banana peel (somewhat trivial) can make good chaos if they throw it on the highway (I said cartoons!). However, real-life may have situations that seem like novels. Situations where you are surprised when they tell you. We have had many such moments in our civilization. I will tell you a rather “silly situation,” one for almost everyone, but not for a group of people. An example of this “ripple.”

The $ 5 bill that changes lives.

I tell this story with the permission of a person I work with, which, of course, I keep anonymous. Here we test that “ripple.” However, if you (that person) reads this, you will like hehe. This person works in a hardware store. A customer bought some wooden planks, and this person helped him take them to the car. Upon arriving at the vehicle, the customer gave him five dollars. It is possible that for that client, those five dollars are chump change since he had a high-end pick-up van. On the other hand, for this person I work with, those $5 were extra-money to self-treat himself buying some donuts, triggering gratitude.

When this person arrived at the establishment, he decided to eat one there, and it was there that he met his current partner. There is a lot of history behind all this. They have a couple of kids now, and those children, in the future, who knows? … Maybe one becomes an engineer who contributes to an important invention. And if you want to curl it further, perhaps one of those children could be a surgeon who saves the life of an inventor during surgery. That alone will positively impact the family of said inventor and society because that inventor in the future revolutionized space-travel technologies. And all this for five “lousy” dollars. Maybe only it happened because a client wanted to buy some wooden planks to carry out his idea or project. Wooden Planks!!!

It’s the usual thing, as I said at the beginning, nothing new. But it is a good reminder. A small action, a little push, a tip, etc … can change a person’s life on an astronomical level. It can begin to multiply to unsuspected levels. These ripples are powerful.

Now it’s your turn to try yourself, stick with your ideas and actions! You never know, but most likely, you will change someone’s life. If so, you will also change the lives of the people around that someone you impacted. And you know… a chain reaction begins, a ripple that goes far! Next Friday, it’s Christmas! You know that I love Christmas. So let’s see if I can think of something to write for next week, maybe something about Christmas at the energy level, some surprise or something, let’s see! But all this, in one week! I am pretty sure you are going to enjoy the read! See you next Wednesday!

← Prev: Shamanic Healing: A powerful healing to find lost fragments of yourself, recover them and regain what is yours. Next: Merry Christmas! And if you don't celebrate it, I also wish you lots of energy and abundance. →

We have strong realizations about life once we start awakening.

Realizations we have about our existence once we are awakened.

END_OF_DOCUMENT_TOKEN_TO_BE_REPLACED 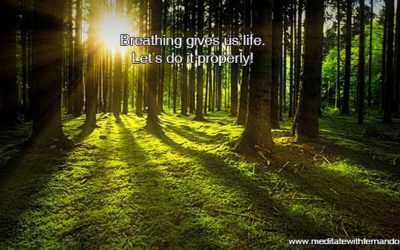